Retiring in the Himalayas

Retirement living has a different meaning to different people.

Simon Cavendish has started a form of retirement living that replaces paid work with volunteer work – much of it environmental - while living partly in Australia and partly overseas. It means dividing his time between both: 3 - 9 months in Australia and 9 - 3 months overseas.

In Brisbane I lived in my usual way and prepared for the Himalayas. My work for EIANZ acknowledged that communications would be fairly difficult in Tibet, Northern India and Nepal. I took over as Chair of EIANZ’s Climate Change Special Interest Section when Alastair Buchan was diagnosed with terminal cancer and handed the role over to Tor Hundloe. While overseas I retained a fairly straightforward governance role.

I completed a Business and Operating Plan with the CEnvP Board and drafted a Policy and Procedures Manual for CEnvP Scheme staff. Those important tools enabled me to be fairly free of governance and compliance matters while overseas.

For much of the month spent in Leh, Ladakh, my wife and I moved into a delightful guesthouse with a local family hoping, in small part, to share aspects of their lives. They accommodated us and occasionally fed us. We went on joint errands and I helped with business and living ideas.

Volunteer work was 200m away at the Snow Leopard Conservancy – India Trust (SLC-IT). The team were a fun and earnest bunch of Ladakhis conserving not only snow leopards but increasingly the ecosystems upon which they depend. I helped with governance:  a strategic and business plan, an operations manual (based on CEnvP’s) and an employee handbook.

My wife and I enjoyed our surrounds and took time to be tourists. We went on a seven day trek in the Markha Valley. Jigmet from SLC-IT found us a young local guide, Stanzin, and a young porter, Chotok. We stayed with Chotok’s mum, had tea with Chotok’s sister (and with Angmo’s – from SLC-IT – mum and dad). We got the boys excited about birds and mammals. They got us excited about their childhood places, homestay families, village harvest and their work future. Subsequently, we have helped with references and ‘career guidance’. 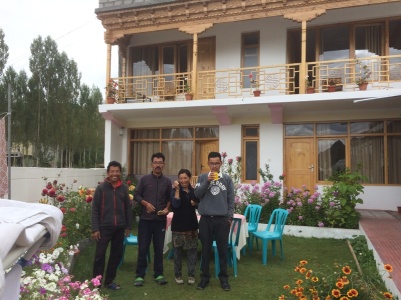 Above: The Snow Leopard Conservancy team at morning tea

The way from Leh to McG

I decided to walk much of the way from Leh to McG.

Above: Simon on Kalihani La glacier (4300m) looking towards Bara Bhangal valley (one village and one trek group seen in 10 days)

Our guest house for six weeks was more like...... a guest house! Congenial all-male staff led by the ever-obliging Surinda. Facilities were better, e.g. a kitchenette which we used for snacks and making essential cups of tea!

Work was multi-pronged. I was based with Lha Charitable Trust writing  a series of environmental articles for its magazine and website (using photos I took in Tibet and India) encouraging Indians and Tibetans to improve their environmental performance. I helped with Lha’s 20th anniversary and offered retail, waste, volunteering and water improvement advice. I also did other volunteer roles on the side such as child care, support to a slum kids school and conversational English for refugees. My wife prepared a style guide and wrote and edited for The Tibetan Library of Works and Antiquities. 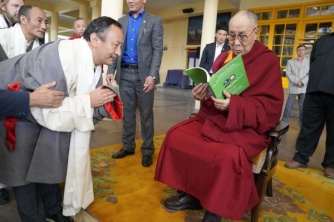 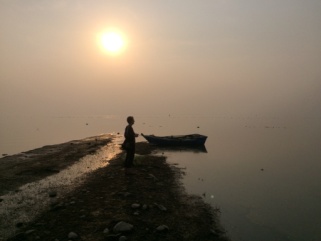 While my wife stayed on, I relocated to Nepal.

I based myself with Amber and Sushma in Kathmandu for trips to the Solukhumbu and Chitwan regions.

Originally, I planned to write environmental guidelines for the Nepal Mountaineering Association. But Amber and I hatched a plan to test a 'Teach and Trek' idea in the Lower Everest region of Solukhumbu.

We trekked to his home village, Lumsa, where for a few days I taught conversational English to aspiring guides, porters, cooks, English teachers and villagers and then we trekked on and out. I repeated the process with Gomba Sherpa and his village, Chitre. All up, it was three weeks where tourists do not travel. We were successful enough that Teach and Trek will be offered in December 2018 to tourists wanting not only an exciting cultural and active experience but also to leave a legacy. 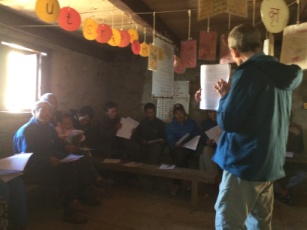 Above: Simon teaching in Chitre

After all this ‘work’, I decided to have a Christmas ‘holiday’ in Chitwan National Park. The Park boasts at least 544 species of birds, many impacted by misuse of farm chemicals. So, Christmas day was spent with local farmers who over the last 10 years have been encouraged to embrace organic farming.

Overall, the mix was fascinating. Living sustainably, or not, was a re-occurring theme.

The main difference between living overseas and living at home in Brisbane has been the rich, fascinating cultures and wonderful rugged landscapes of the Himalayan region. It offered lots of compensation for missing out on those regular long-term friendships and routines.

Simon has nearly 30 years experience developing, promoting and encouraging the adoption of best practice ‘environmental’ sustainability. He has a record as a high performance team and project leader for many private companies, professional associations, EnviroPartners and government departments. Underpinning this, is an additional 18 years engineering, science and military experience with contractors, consultants, government and the community in Australia and in more than 50 countries overseas. Simon is a FEIANZ and accredited Lead Environmental Auditor. He is on the CEnvP Board and EIANZ’s Climate Change SIS Executive. He is increasingly working in climate change, mentoring and the music industry.

We acknowledge and value the rights and interests of Indigenous Peoples in the protection and management of environmental values through their involvement in decisions and processes, and the application of traditional Indigenous knowledge.